Sergey Bugrovsky lives in Lipetsk. His windows look out over the huge construction, the Lipetsk metallurgical complex. The coloured smoke produced by the plant turns the blue sky to pink and yellow.

Such a view for an urban artist doesn’t seem to have inspired Bugrovsky for cityscape painting. His workshop is full of portraits of nude models.

The artist was born in Lipetsk in 1962. He says he dreamed of becoming a scuba diver when he was small. While in school Bugrovsky read and wrote many poems. When the young Burgovsky became interested in contemporary art, he began to study the art described by Soviet magazines as “the rotten culture of the West”. At that time he started to show his talent in mathematics and physics, and his parents insisted that he go to a local polytechnic institute.

The artist says that he began drawing when he was in the ninth grade. He started to paint when he was a second-year student at the institute. In 1988 Sergey Bugrovsky began to study at the faculty of painting at the Penza art school. There he found a circle of acquaintances which brought together students with a shared love of modernist art. This atmosphere influenced Burgovsky’s development as an artist. The group of emerging artists organized joint and personal projects and participated in the exhibition Interart-89 in Poland. In this environment Sergey Bugrovsky and Olga Bueva established their creative tandem. (You can see graphics by Olga Bueva in the exhibition on the third floor.)

Bugrovsky’s painting style, with its trademark expressiveness and cold colour palette, was established during his years of study. His works are characterized by anxiety that expresses the artist’s worry of facing the complex and unstable world. 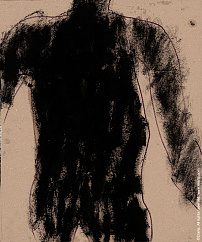