Nikolay Vikulov was born in the village of Mikheevo in the Vologda region in 1936. He received an artistic education at the Yaroslavl’ Art School. After graduating, Vikulov taught drawing at a secondary school and worked in local television. In 1989 he joined the Union of Artists.

At present, the artist lives in Cherepovets. Vikulov’s painting style is figurative and is almost always narrative. The artist depicts rural Russian life with its typical characters and everyday situations. In his pictures, time seems to stop and it isn’t easy for the viewer to determine what time period the artist had in mind: it could be the 1960s just as easily present day.

Vilulov uses dark colours in his painting: natural tones of green, ochre and sepia. These colours add a kind severity which is in keeping with the lives of his characters, the people who earn their living by physical work. But instead of presenting these people as heroes as they were presented in Soviet paintings of the so-called “austere style”, the artist creates stylized, partly simplified and popular images. This technique avoids gloom and over-exaggeration and makes the painting more comprehensible, ironic and popular. On the other hand, the stylized human images can easily be interpreted as archetypes formed of the artist’s individual mythology. 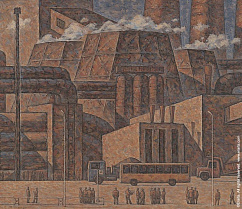