Very little is known about Gavrila Lubnin. It is known, however, that he was born in Leningrad in 1969. It is known that the graphics of Gavrila Lubnin became popular all over the country thanks to social networking websites. It is also known that Lubnin is a painter, poet and musician. On his personal webpage the artist describes himself: “I paint, draw and build”. The books of poetry by Lubnin are good examples of the synthetic genre that combines poetry, graphics and print design. Thin sheets of kraft paper, careless drawings and simple but witty absurd couplets — this is how he won the hearts of the people. The graphic series by Lubnin satisfy people’s thirst for city folklore which now lives only in the Internet. His poems are often quoted, and his recognizable style and serial character of drawings made them a contemporary equivalent of lubok pictures, a variety of Russian popular art. The folklore spirit of Lubnin’s art is enhanced by a rather unsociable lifestyle of an artist who doesn’t like being interviewed and seems oblivious to his fame.

The Erarta collection features paintings by Gavrila Lubnin. The artist used to work in the Village of Artists (an association of artists in Saint-Petersburg) and he often applies media such as plywood and oil to depict his favourite rural motifs — a self-portrait with a cat, a stray dog, or a still life. With this cozy scene, Lubnin can say much more about himself than in any interview. 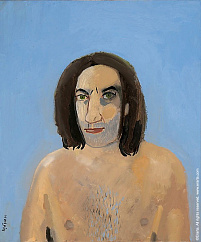