Zinaida Ruban is an artist, whose formation and creative self-realization coincided with the flowering of Siberian unofficial art. Born in 1949 in Mariinsk, she then lived in Moscow, Rostov-on-Don, and for the last thirty years has been living and working in Novosibirsk. Her first solo exhibition was initiated and held by Sibinterart Gallery in the years of “Perestroika”.

In 1992, Zinaida and her husband, the artist and poet Nicholai Myasnikov, became co-organizers of the informal creative association “White Gallery”, which brought together numerous underground artists from Novosibirsk, Barnaul and Gorno-Altaisk. From 1993 to 1994 White Gallery exhibitions were arranged at the art museums of Novosibirsk, Tomsk, Novokuznetsk and Barnaul.

The original black and white, laconic, conditional, and geometrized style of painting, akin to the monumental one, has always distinguished Ruban’s works. They were first presented to the wide public at the “Black and White” exhibition in the Novosibirsk Art Museum in 2003. For more than twenty years, sometimes to the detriment of her own creativity, Z. Ruban has been taking care of the White gallery collection and archives, and in 2014 she became a co-curator for the project “Siberian Underground Art. 20 Years Later”.

The project was shown in Novosibirsk, Tomsk, Novokuznetsk and Barnaul, and in 2015 its original version was hosted by the Erarta Museum of Contemporary Art in St. Petersburg. Zinaida Ruban says that aikido is what gives her vital energy and creative thinking.

Over the last three years Zinaida Ruban has participated in the following exhibitions: 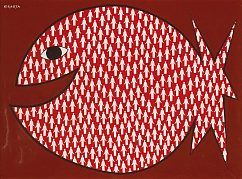