David Plaksin does not belong to any specific group of St. Petersburg artists and this is what ensures that his work inspires such exceptional following. Plaksin’s atypical experimentation with mediums allows for a constant rebirth of content and form. His choice of tempera over the traditional form of oil paint for some of his pieces allows the art lover to explore a more traditional and ancient type of artistic pursuit and allows one to travel back into pre-renaissance art. This venerable tradition of tempera is explored in the most unconventional of ways, hence though the pursuit of still-lifes. Nonetheless, the still-lives themselves are not the common types to be found within the art world. The content of the artworks are explored in a prodigious manner, as a minimalistic palette is utilized, whereby the dark consistently contradicts the light. This elementary color scheme allows one to focus on the interplay of light and shade as well as the hidden message of the artworks. In addition to this, texture also becomes more conspicuous in this way.

Nevertheless, it is also important to also account for his two masterpieces, which Erarta is proud to include in its exhibitionary collection. Both of these were completed in the form of oil on canvas. ‘I’ and ‘We’ have a stupendous correlation with the Russian nature of the exhibition. The consistent shape that is evident within the ‘I’ painting is actually the outline of the Russian letter ‘я’, which stands for ‘I’ in English. This topic of self-exploration is also investigated by Plaksin in the other oil painting, which aims to represent the unity of man, hence is titled ‘We’. Interestingly, the corresponding Russian letter cannot be so easily seen within the piece, which leads one to believe that Plaksin yearned to represent the west-Germanic community instead. The intimate relationships between these two paintings can be explored ab infintium, which is why it is important to let oneself be carried away by them both.

On a biographical level, David Moiseevich Plaksin was born in Leningrad in 1936. He graduated from the prestigious Serov Leningrad Art College (ЛХУ им. Серова) in 1957 and from 1975 onwards he was part of the Leningrad Gorkoma artistic movement. From 1980 onwards Plaksin was a member of the union of Russian Artists, which allowed him to join the national federation of artists in 1990. Plaksin himself has been represented in numerous coveted exhibitions throughout Russia and the west. Primarily, this was evident in his inclusion of the ‘Nevsky’ exhibition in 1975, (‘Невский’), which firmly established him as an honorary artist at the time. In addition to his engagement with oil and tempera, Plaksin has also been known to experiment with design as well as illustration. Plaksin is an exceptionally well respected and known laureate and artistic diplomat, who has been known to represent Russia through the medium of his artistic talent. 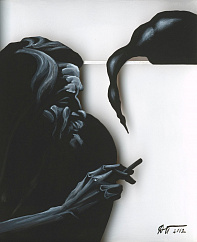