Sergey Shnurov is known all around Russia not as an artist, but rather as the frontman of a famous music band, Leningrad. In fact, the band has become legendary and is widely loved primarily due to Shnurov’s acting talents. He managed to create, or, more precisely, “announce” an archetypical half-forbidden image of the macho Russian, a merry guy who loves hitting the bottle and hates straining himself.

Shnurov was born in Leningrad in 1973. After finishing school, he studied in the Leningrad Engineering and Construction Institute, the Technical School for Restoration Works and even in the Institute of Theology and Philosophy at the Theological Academy. However, for the good of his numerous fans, Shnurov has gone through other universities of life that has infected him with a passion for creativity. Today we can state that there is another talent of Shnurov, that of an artist.

Shnurov’s painting is another project built around a particular concept, in this case the “brand-realism” concept. He described it in a mission statement written specifically for this project. The statement outlines the roles of brands in our modern world and states that the choice of using a brand by a person is equal to the choice of one’s essence. 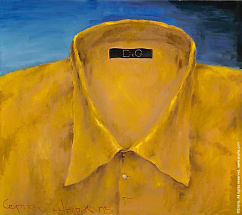