Aron Zinshtein was born in Nizhny Tagil in 1947. As a child, the future artist attended drawing classes at a local cultural center. He then entered the famous art school in Nizhny Tagil. Zinshtein didn’t want to stop at what he had achieved and moved to Leningrad where he entered the Mukhina Art School. After graduation, Zinshtein worked in the workshop for monumental and decorative art that belonged to one of the city constructing institutions making interiors for public buildings and offices. It was then that Zinshtein started to make sketches that later served as the basis of his artwork.

Aron Zinshtein is known not only as a talented painter but also as a graphic artist: apart from the hundreds of etchings and linocut prints he designed a great number of publications for books by Shakespeare, Dostoyevsky and Bulat Okudzhava. Gouache pictures by Zinshtein as well as his paintings and graphics are often comparable to the children’s drawings that he collects by swapping them for something from little genii. They look very harmonious on the walls of his workshop.

Zinshtein works in a pronounced, expressive manner. His works always demonstrate motion, vitality and irony. This cheerful spirit is what distinguishes Zinshtein’s style from the German or American expressionism. The artist hardly ever paints from nature. Instead he makes numerous sketches and arranges them into albums. Later, he recreates those drawings in colour on canvas or paper. Zinshtein’s subjects are the most diverse and simple — they are prompted by life itself. These are people who hurry along the city streets and are carried by underground trains. One can spot the artist’s fondness for city celebrations, sport festivals and spectacular events: parades, fireworks and football. The artist singles out many typical gestures and postures and, at the same time, analyzes the crowd as one plastic whole.

Aron Zinshtein was always a long distance away from all the possible “left” and “right” movements in art. He wasn’t recognized by both — Soviet official art and non-conformist artists. He values frankness and freedom in art. Zinshtein confesses, ‘I am a naïve artist, I can depict everything’. 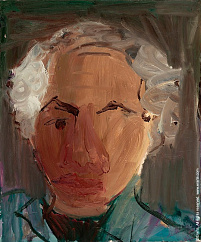