Since the moment of their meeting at the department of art and graphics at Herzen University, Natalia Melnikova and Vladimir Fomichev (Fomichyov) have shared a common life and a common pseudonym, Ko-MEL-FO.

Born in Leningrad in 1961, Natalia Melnikova enrolled at Herzen University to study drawing and painting immediately after completing secondary school. After graduating in 1987, she began working as the head of an art studio in the Nevsky Cultural Center, a legendary place in the history of Leningrad underground art. Natalia Melnikova passed away in 2003, leaving positive memories and an impressive record in the art of Saint-Petersburg.

Vladimir Fomichev was born in 1953. A graduate from the Leningrad machine-building institute, he went on to study art at Herzen. Due to his first technical education, KoMELFO have complex kinetic objects among their works, as well as interesting solutions for arranging expositions.

Melnikova and Fomichev’s tandem became prominent in the art life of Saint-Petersburg since 1985, when they began organizing art events and participating in exhibitions in Russia and abroad. One of Melnikova and Fomichev’s most interesting joint projects was introduced in 2000 under the title Na Oshchup’ (By Touch). This was KoMELFO’s artwork exhibition in Antarctica. The exposition, which included 54 art pieces, opened on 31 December, 1999. In the frameworks of the project, KoMELFO published the book – A Concise Russian-Antarctic Dictionary. Romantic Version.

Currently, Vladimir Fomichev works with Zoya Norina. The artist kept the name KoMELFO in memory of Natalia Melnikova, therefore Vladimir Fomichev and Zoya Norina’s common works are signed as KoMELFO and Norina. Their exhibitions are always aimed at the dialogue with a viewer — the pictures can be suspended in the air, or stretched on a drum and spun. Thus, they include space into their works of art and invite the audience to make their own interpretations of an unexpected artistic approach. 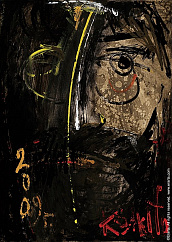