What Vladimir Fateev loves in theatre is painting, what he loves in painting is theatre. This is not surprising, as he has worked as a theatre artist all his life. Vladimir Fateev, born in Krasnoyarsk in 1951, graduated from the Surikov Art School — one of the most respected art schools in Siberia. Here he met his teacher, Andrey Pozdeev, a well-known graphic artist and painter. After graduating, Fateev moved to Leningrad and enrolled in the Leningrad State Institute of Theatre, Music and Cinematography where he studied art and staging. After his studies, he went back to Krasnoyarsk. Shortly after his return, a new opera theatre opened in Krasnoyarsk where Fateev began his work as a stage artist and was given an apartment. At that time, Fateev’s life and work were directly connected to the theatre. Therefore, when he realized that the opera theatre did not have the finances to put on quality performances, Fateev moved to Novosibirsk. When the Novosibirsk troupe broke up, he took up painting. Nevertheless, he went on travelling around the country and worked on decorations for stage performances until Perestroika. By that time, Fateev had decorated more than seventy theatre sets.

Today, Fateev works for the Novosibirsk Drama Theatre. The artist makes a strong distinction between his work at the theatre and his individual activity.

‘Painting is an individual activity, while theatre is a collective one. Whatever you had thought out, whatever you had drawn — when the actors make a bad performance, when they didn’t manage to enchant the audience, your painted fountains and peacocks won’t help’, says the artist, ‘but the role that the same fountains and peacocks play in an individual painting depends on the artist only. The artist makes his case with wonderful paintings that depicts biblical and mythological scenes. He uses thick, bright fauvist colours, though in a very laconic, almost schematic way. This follows how Fateev manages to emphasize the pivotal idea of the scene while ignoring all of the excessive details. A wonderful example of such schematic manner is Chapaev. Fateev says about this work, ‘Chapaev is swimming, you see the diagonal motion. This is how I accomplish the task of the painting — to show that he is sinking in the water’s foam. There is the other diagonal from the left to the right — neither the machine gun, nor the horse can help him. Two diagonals. It seems that it’s not complicated but this is the reason why composition is important.’ 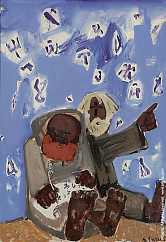