Artem Starodubtsev was born on December 28th, 1961 in Petrozavodsk, USSR. Originally Starodubtsev went into the field of physics, more specifically quantum physics, which manifested into him receiving a phD on the subject. Nonetheless, Starodubstev was always fascinated by art and one of the reasons as to why he was attracted to quantum physics in particular is that it allowed him a better understanding of the nature of dimensions within this physical world as well as the abstract world of art.

Consequently to the collapse of the soviet regime, Starodubtsev graduated in 1992 from the graphic arts department of the Herzen State Pedagogical University of Russia, which is located in Saint Petersburg. This particular choice of schooling allowed him an in-depth understanding and grasp of illustration and visualization, which is evident when analyzing his compositions. One particular aspect to note, when assessing his works, is his swift and efficient control of his brush, as well as the bold technique with which he wields it. Furthermore, the thick strokes indicates the author of the works is steadfast and accurate in his overall realization of rhythm of his work. It signifies an artist who has a very clear comprehension of how a work of art can be completed and one who sees every step of the path of its realization.

From 1996, Starodubsev's artistic endeavors ensured his acceptance into the National Union of Artists, which indicates his artistic work as being nationally accepted as the standard expected by the government and artistic institutions as well as being sufficient in representing the contemporary Russian art scene. It should be noted that in order to be able to call oneself an artist the inclusion into this particular union is vital, as without it, one's work would be graded as amateurish and hence it would be difficult if not impossible to sell and exhibit one's works of art.

Currently, Starodubstev still pursues his artistic passion, whilst teaching at the Faculty of Technology and Entrepreneurship Karelian State Pedagogical University, Petrozavodsk, Russia. The geographical re-location has had a positive influence upon his works, as it has given him a contrast against the typical St. Petersburg art scene. This disparity has allowed him to create a greater depth to his works of art. 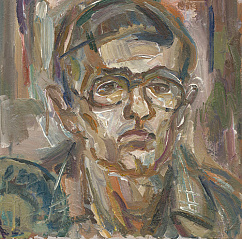