Dmitry Flegontov was born in Leningrad in 1957. His first contacts with art were with sculptures by Petersburg artists and, later, the Ancient Greek masters. Before enrolling in art school, Dmitry’s drawing albums already featured numerous images of ancient athletes.

Nikolay Pyatakhin, a teacher at the art school, made a great impact on the artist-to-be. He introduced Dmitry to his own theory which explained the objectives of visual art. He taught him not to fear illusiveness in painting and proved that the language of painting differs radically from any other language of art, and therefore doesn’t need to fear any competition with the latest technologies. The teacher directed his students toward masterpieces of the Hermitage collection and they often wandered for hours through the museum’s halls talking about Rembrandt, Derain and Picasso.

In 1979, Flegontov graduated from Herzen Institute where he studied art. Artistic life at that time was full of new trends: in 1981 the nonconformist Association of Experimental Art started to organize exhibits. The Union of Artists presented Arshakuni, Vatenin and Tyulenev. Such a background modified Flegontov’s artistic priorities: while favouring Derain, the early Middle Ages and primitive art at the beginning of his career, Flegontov later became fascinated by Rembrandt and the art of the 17th century. He decided that he wanted to make a broad texture painting.

Flegontov’s favourite theme remains the same: urban life. The artist doesn’t like to paint from nature and tries to avoid philosophical or forced subjects, symbolism and literary references. Flegontov sees painting as an art of contemplation and tries to rid his works of multiple meanings. He wants to help the viewer to perceive the visual characteristics of a painting: composition, colours, and light. This is the only condition for painting to carry out its mission: the art of painting can make the feeling of unconscious empathy possible. 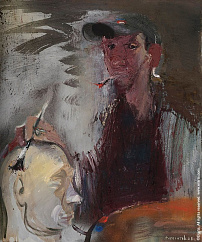