Vladlen Gavrilchik was born in 1929 in an Uzbek town of Termez. Gavrilchik was inspired towards drawing from the beginning of his school days. The young artist’s step-mother enrolled him in an art school secretly, although the opportunity for him to study there never manifested. Consequently to his completion from school, Gavrilchik went on to graduate from the Suvorov School in Tashkent in 1947, and later from the High Naval School in Leningrad in 1951.

Gavrilchik’s painting practice began in Leningrad after he demobilized in the early 1950s. The emerging artist attended drawing studios at cultural centers and studied many movements and techniques through consistent visitation of museums and exhibitions, as well as personal affiliations with artists at the time. His encounter with Mikhail Tsibasov, one of the most talented students of Pavel Filonov, had an important influence on Gavrilchik’s development.

Gavrilchik’s work can be associated with naive and primitive art. Nonetheless, that is not to say that his technique is not refined and guided by classical training. Rather, Gavrilchik actively pursues unpretentious landscapes, still lifes with broken gramophone records and numerous self-portraits. All together these present a narrative of Soviet culture.

Gavrilchik’s perceived simplicity is illusionary. By romanticizing a portrait, poeticizing an unappealing view or turning a rigid Soviet mythologem into a lubok picture with folk sensibilities, the artist ironically plays up a human desire to get closer to the world of elegance.

To some extent Gavrilchik is an apotheosis of this desire. He expresses himself not only through painting and graphics, but also through photography, art objects and even poetry. Folklore motifs are distinctive in his poetry. Gavrilchik uses folk themes like a sorrowful song; a theme that combines a naïve form and a bloodcurdling plot. In his painting and poetry, Gavrilchik revels in the process and essence of creativity which produces a unique effect of light irony. 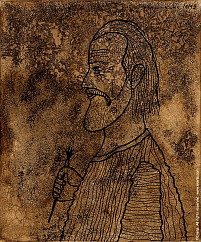