For Oleg Chernov, painting is a way of life.  The artist paints, draws cartoons, teaches and, being an expert in the history of art, can speak with enthusiasm about the lives and works of old masters for hours and hours.

The artist was born in Krasnoyarsk in 1962, but he spent his childhood in the village of Dubrovka, in the southern Stavropol region of Russia, which was the homeland of his father.

Chernov took an interest in drawing when he was a child, and at the age of fifteen he began to think of becoming an artist. However, he did not have the courage to try and enter art school because he thought his drawing skills were not good enough. Instead, Chernov went to the architectural department of a technical construction school where drawing classes were included in the curriculum. After obtaining a diploma and working at the architectural institute for three years, Chernov realised that the profession was of no interest to him.

He still dreamt of becoming an artist so he went to the Stavropol art school to study painting.

The conservative atmosphere of a Soviet school tamed the artistic temper of the young artist quite quickly. When Chernov came across an album of Van Gough he became keen on bright, expressive painting. One day, at an art exhibition of customary social realism, Chernov was stunned by pictures that drastically differed from other works he had seen. These were paintings by Petr Gorban. Chernov confesses that he felt that professional artists seemed like celestial beings to him then, and he didn’t dare meet the artist for a long time. Eventually his friends introduced him to Gorban’. Chernov became an apprentice for several years in Gorban’s workshop, which had a perfect view of Stavropol and the surrounding hills. Chernov became the most loyal and consistent student of the master.

In 2002 Chernov moved to Petersburg and joined the Creative Union of Artists. He exhibits his works quite often and is still fanatically committed to painting. 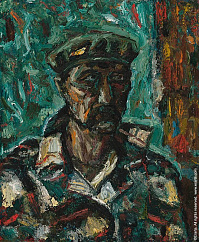