A true legend, Bob Koshelokhov was one of the key figures of the Leningrad avant-garde art. The philosophically inclined patron of the iconic Saigon café, vagabond and coffee addict whose track record features sporadic studies at several medical schools and stints as a hospital orderly, electrician, driver, and field hand for an exploration geologist party, in 1974, spurred on by the non-conformist art shows at the Ivan Gaza and Nevsky cultural centres, Bob started making assemblages, subsequently transiting to painting.

In 1977, he founded the Letopis (Chronicle) collective of unofficial artists that honed the talents of Elena Figurina, Timur Novikov, Ivan Sotnikov, and other stars of the St. Petersburg art scene and later became the talent factory for the New Artists group. In 1978, having married an Italian national, Koshelokhov moved to Italy, where he took part in the 38th Venice Biennale and exhibited his works in Roman galleries, only to return to a communal flat in Leningrad after a couple of months. ‘I’ve got countless peers there, but here I’m peerless,’ thus the artist explained his decision to one of his friends. Deprived of a studio, Koshelokhov alternately worked in an attic, on a stairwell landing, and in his communal apartment room, creating paintings, drawings, and wooden sculptures. His very distinctive ‘raw’ creations were likened to Naïve Art, Art Brut, Neue Wilde, and graffiti. His art is self-contained, instantly recognisable and as far-reaching as a grenade launcher. Among his large-scale projects are Dolls March Across the World and Holy Sinners. Two Highways, the artist’s final series, comprises three to four thousand canvases, drawings, computer graphic pieces, and pastels. In later years, Koshelokhov would lock himself in his studio that, since the early 1990s, was housed in the Pushkinskaya-10 art centre, and dive into work just like someone else might dive into a drinking binge.

Bob Koshelokhov died at 79. Throughout his creative career, he remained an amazingly productive artist. 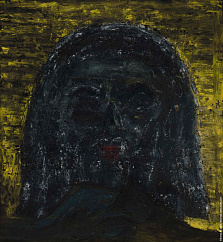 Boris Koshelokhov was born in 1942 in Zlatoust, Southern Urals. The artist lived and worked in St. Petersburg where he passed away in 2021.

Works are in the collections of: