Vladimir Zagorov, whose real name is Vladimir Tolstoy, was born in Krasnodar in 1951. Zagorov’s parents encouraged his interest in art in his early years. His father often gave him books on art as presents and his mother introduced him to music and singing. After completing secondary school, Zagorov studied at the Krasnodar Art School. During that time in the sixties, Zagorov's artistic preferences were greatly influenced by the talented teachers who gave him lessons. The artist moved to Leningrad in the seventies and enrolled at the Repin Institute to study painting. Zagorov studied at the famous Andrey Mylnikov workshop for monumental painting. Despite of the well-known fact that Mylnikov’s painting style dominated his students, Zagorov didn’t become “a man of the school”. Upon graduating from the Academy, the artist travelled to the monasteries of the Russian North making copies of the masterpieces found in his journeys. He explored the works in Ferapontovo, Vologda and the Kirillovo Belozersky monastery as well as in the storerooms of the Russian Museum where he first sees the artwork of Kandinsky, Malevich and Filonov. The great works Zagorov has seen has left a lasting impression on him and still influences his art.

At a certain stage of Zagorov's artistic development, he faced the problem that he could not render some of his emotions and ideas through figurative painting, so he became interested in abstraction. Zagorov has always paid great attention while working on a painting. His practice involves making the canvas smooth, without lumps of paint that would indicate a quick expressive manner. The artist will touch the canvas many times and construct an image from numerous small brushstrokes. The process of image construction is more important to him than rendering his feelings on the canvas. Zagorov doesn’t strive to depict this thoughts or feelings as was important to expressionists, but instead he tries to crystallize the idea as a whole.

There is a point in time when Zagorov became fascinated by colored abstraction. This fascination began with his trip to Uzbekistan in 1984. Parallel to this fascination with abstraction, Zagorov creates figurative paintings as well. In 1987, Zagorov was invited to teach at the Schtiglitz Academy where he worked until 1991. Vladimir Zagorov treats a picture as a result of meeting with reality by experiencing and interpreting it. In spite of everything, the artist says that he is a practitioner of realism who depicts his own individual, private reality. 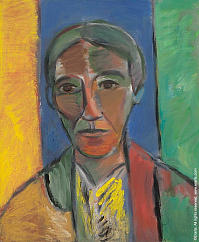