Valentin Gerasimenko was born in Leningrad in 1935. Gerasimenko started drawing as a child but later chose to study geography at Leningrad State University.

In 1957, when he was about to complete his university education, Gerasimenko became friends with Rikhard Vasmi, an artist in Arefyev's Circle. This meeting made a serious impact on the young artist's world-view. Gerasimenko discovered the environment of unofficial Soviet avant-garde and began to study its Russian and Western exemplary works with great enthusiasm. This study helped him form his individual attitude to art.

Gerasimenko worked in the system of official art for some time: he worked as a television artist and then took a position at an art and decoration workshop in Tosno where posters were produced and he worked to decorate the local community centre. The Tosno workshop developed into a cradle of avant-garde where Gerasimenko and other practicing artists, Aleksandr Gurevich and Vladimir Dukhovlinov, were maturing as painters.

Gerasimenko and Gurevich took part in the legendary Nevsky Cultural Center exhibition in Saint-Petersburg in 1975, an event which brought to light the exhibition activity of these so called unofficial artists. Gerasimenko joined the Association of Experimental Exhibitions, which was formed soon after the event. In 1988 Gerasimenko was one of the first explorers who "developed the territory" of an empty house at 10 Pushkinskaya Street, which then became the epicenter of St. Petersburg artistic life in the 1990s.

In 1977 there was another encounter of great importance in the artist's life. He met some Lithuanian graphic artists who triggered his interest in printing graphics — an interest which increased with the passage of time. As a graphic artist, Valentin Gerasimenko experimented with materials in a constant search for new methods. One exhibition featured not only Gerasimenko’s etchings, but also his printing plates: it turned out that the artist used beer cans to make prints. Having fully mastered various printing techniques, he continued to surprise the viewers with new printmaking discoveries. 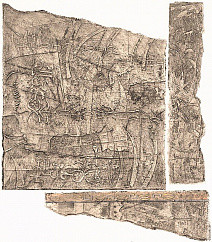