“This is my world. It is beautiful and I don’t need another one”, said Zaven Arshakuni once as he attempted to explain what he paints. Arshakuni is one of the most famous and recognizable artists of Saint-Petersburg. His painting has a bright, vivid richness, but at the same time it demonstrates that unique Leningrad style and its noble fascination.

The artist’s childhood was tragic, though typical for many children born shortly before the war. Arshakuni was born in Leningrad to an Armenian-Russian family in 1932. The artist cherishes the scarce memories from his early years of going on tram journeys with his mother before the war. Old trams and the Neva tugboats later became subjects for many of his paintings.

Then the Great Patriotic War began. Arshakuni’s father was killed while protecting the city and his mother died of starvation. The boy was taken to an orphanage and was later evacuated to the Volga. Arshakuni was found there by his uncle who then took him to Yerevan. In Armenia, he constantly made drawings of the war and the Leningrad blockade. Once he grew older, however, he never would return to this theme again. After having lived at his relatives’ for about a year and a half, Arshakuni presented them with an ultimatum: “Let me go back to Leningrad or I will run away!” They let him go. In Leningrad he lived and studied in a boarding school and also attended a middle school of art.  In 1954, Arshakuni enrolled at the Repin Institute of Painting, Sculpture and Architecture. The artist successfully defended his final project, Spring, on his second attempt and then joined the Union of Artists in 1962.

An exhibition held in November 1972 became the event that united The Group ‘Eleven’ that Zaven Arshakuni belonged to. All eleven artists that participated in the group were led by the famous art critic Lev Mochalov, and were also members of the Union of Artists. They formed the first and only legal opposition within the Soviet art structure. The artists promoted an approach which was not loaded with the sternness of the Soviet ideology. They focused on a different, more liberated, lyrical painting manner and preferred mostly to work on urban landscapes and still lives.

After the exhibition, Arshakuni’s painting was criticized for being too bright and formalistic. Indeed, works by Arshakuni were always striking in sharp contrast to the monotonous background of the Soviet art. He painted cityscapes freely, without looking back to the Soviet tradition which created an austere and heroic image of the city as a cradle of revolution.

The city depicted by Arshakuni is harmonious. The colours he uses are lucid and clear and this fills his landscapes with an air of freedom. The artist constructs composition as though he gets wings that fly him up to the sky and he looks at everything from above. He presents the city and the world in the best way possible as he sees them. Apparently, this lightness of style is a result of a great experience in working over composition, colours and plastic qualities. This is illustrated his work, The Summer Garden, which is featured in our collection.

The artist takes pleasure in working on Biblical themes which are often placed in action on the stage of modernity. This is true about his painting, Annunciation, which is displayed in the exposition.

Zaven Arshakuni doesn’t strive to teach. He explains that he always learns something new and every time he discovers the principles of painting anew. 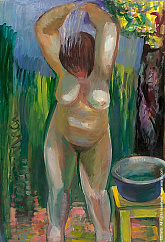