Valery Lukka was born in 1945 in the village Porokhovo, located in the Yaroslavl region. In 1977, Lukka received a diploma from the Repin Institute of Painting, Sculpture and Architecture in Leningrad, where he later started his artistic activity.

In the late seventies, Lukka, along with Vyacheslav Mikhailov (also an Academy of Arts graduate) and Felix Volosenkov, became a founding member of an art group devoted to searching for new ways of expression, as all art groups do. In order to create a desired artistic effect, the group members use layers of paint to create relief. This is how they rejected an established painting tradition they respected. They aimed at making their works closer to true life and more organic. In addition to their true to life focus, their creative work still contained literary references and links to eternal mythological images. The most of their attention, however, was paid to the physiology of texture.

Experts of Lukka’s art describe his works as containing a ‘specific individual style of conceptual expressionism’. Indeed, Lukka’s painting is distinguished by its sincerity and often with sick hysterics, but, being a true fruit of postmodernism, it is charged with irony and full of references from classical art.

He chose not to use customary techniques and themes in order to give his art a "living" quality, which is an approach that has its followers. Each of the three innovative group members are canonized by art critics and admirers who call the group TheThree Bogatyrs (a group of heroes from the Russian folk epics). The artwork of Felix Volosenkov and Vyacheslav Mikhailov is also featured in the museum collection. 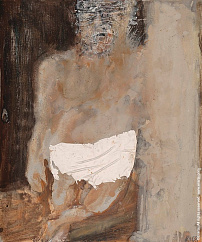 Since 1978 participant of more than three hundred exhibitions in Russia and abroad.

Works are in collections