The House of Pioneers in Podolsk was functioning even during the Great Patriotic War where drawing classes were held. One day a group of boys happened to come there. One of these boys had the courage to enter the class and was immediately given a thick pencil and sat down to draw. This boy, the artist Vladimir Elchaninov, has grown to be awarded the most honorary distinctions artists of Russia can imagine.

Vladimir Elchaninov was born in 1932 in Gzhatsk (at present Gagarin) in the Smolensk region. After the drawing classes at the House of Pioneers, he went to the Moscow School of Arts and Graphics and later the art and graphics department of the Moscow State Pedagogical University. The time of his high school education coincided with the beginning of ‘Khrushchev’s Thaw’ (the period of a slight relaxation in censorship in the mid-1950s). Students of the faculty organized the Club of Arts which arranged exhibitions and discussions. According to Vladimir Elchaninov, his most influential mentor and most like-minded artist has always been his teacher, the famous artist Boris Nemensky.

After graduating, the artist moved to Smolensk and became a teacher at the Pedagogical Institute where his colleagues and he established the department for art and graphics. In 1962 he joined the Union of Artists and spent a few years in Moscow studying for a post-graduate degree.

From the very beginning of his artistic career, Elchaninov has painted big subject works very successfully and that has been acknowledged by his many medals, diplomas and titles. However, this public acknowledgement in Soviet times didn’t make Elchaninov into an official artist of ‘social realism’.

During the post-Soviet period, the artist was trying move away from realism and find his own style. He managed to find something completely different and develop it into something individual. Within the frameworks of a picture, Vladimir Elchaninov combines a sketchy style, an almost monochromatic colour palette and a symbolic subject. Various artistic traditions are easily and harmoniously combined in his works.

Vladimir Elchaninov makes many sketches from nature. His works show his leanings towards Russian impressionism: his favourite artists are Arkady Plastov and Leonid Turzhansky.

Vladimir Elchaninov was awarded the honorary title of the Distinguished Artist of Russia; his works are featured in numerous museums and private collections in Russia and abroad. 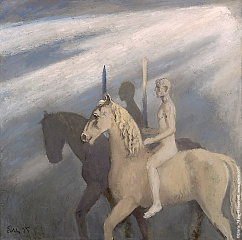