Alexander Fedorov was born in 1954 in Leningrad. His father was an artist and his mother an art critic. It would seem obvious for him to have become a painter, but Fedorov, who was always fond of drawing, succeeded in other school subjects as well. On finishing studying at a school for physics and mathematics, he enrolled in the Leningrad Technological Institute. But still, after getting a diploma in petro chemistry, he couldn’t give up art. One year spent at the Serov Art School helped to influence him toward pursuing the sphere of art and make up his mind once and for all with confidence. Since 1985 he has been exhibiting his artwork.

Fedorov’s unique style demonstrates the duality of his talents: passion for art and ability in technical sciences. His simultaneously realistic and imaginary characters live in an utterly unreal vacuum-like environment. The artist seems to analyse every object and divide it into its components while trying to reveal the overarching structure. The jewellery-like refinement and thoroughness of his painting is close to decorative art but this affection to meticulous depictions always implies a certain intellectual game. Mystery and ambiguity, intentionally entwined into the fabric of a subject, involve the viewer in a game of unraveling images and meanings. 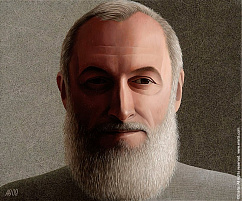