Maxim Kayotkin was born in Chelyabinsk in 1972. After graduating from the Sverdlovsk Art College, he has always continued to study art and develop himself further as an artist. For example, he enrolled at the Ural State Academy of Architecture and Arts in Perm. However, despite having been exposed to a variety of schools and classes under the guidance of different teachers and masters, his own artistic manner and style, which were created in his youth, have not really changed. Continuing the traditions of his tutors, Kayotkin combines creating his own artworks with teaching activities and from 2003 onwards he has been the principal of the Perm Institute of Architecture and Arts. Through his works, Maxim Kayotkin tries to show elusive and contradictory but eternal fragments of industrial civilization, which sometimes look so realistic that they make one observe some elements of photorealism in his works. In his paintings Kayotkin doesn't just state facts or reflect certain realities, but also makes the viewers immerse themselves in the philosophical state of contemplation. His paintings turn into metaphorical windows to another reality. At the same time, the images of people are deliberately not shown in his works. This helps turn the images of industrial objects into some sort of technological vanitas and reminds us that nobody can live forever. 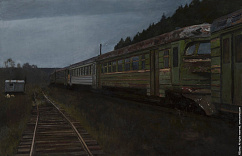