Alexander Trifonov was born in Lyubertsy, Moscow Oblast, in 1946. After graduating from the Kalinin Art and Industrial Design School in Moscow (1972), he moved to Karelia and lived and worked in Petrozavodsk until his death in 2021. Trifonov’s artistic manner, themes and methods underwent a very interesting transformation throughout his career. At first the portraits, landscapes and still lives by Trifonov were similar to the romanticism of the Moscow artists of the seventies. In the 1980s, he was attracted to geometrical abstraction. Later Trifonov went back to a figurative style but his characters and subjects developed in a completely different way. His paintings became geometric and his pictures were painted in cold colours. The artist was very cautious about shapes that helped him develop a specific visual philosophy.

Starting from the mid 1990s, Trifonov began to take part in the exhibitions staged by the Art-Contact group in Petrozavodsk. One of the most famous exhibitions, 10+, opened in Petrozavodsk in 1994 and showed more than two hundred works by artists representing thirty countries. Petrozavodsk based artists managed to create a space where Russian, British, German and Scandinavian artists realised their projects. The group contributed to the artistic development of life in Petrozavodsk and promoted new artists. That was the time — during the late 1990s and early 2000s — when Trifonov started to use computer graphics and exhibit his works together with photographers and designers. The use of computer technology embodied his desire to overcome the restrictions of flesh and sensuality inherent in painting.

The world of Trifonov’s art is mysterious and unreal. It is an attractive and enchanting universe created by the imagination of the artist. 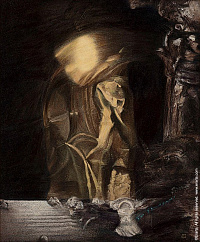