Sculptor, 3D artist and curator Sergey V. Chernov was born in 1962. He currently lives and works in Moscow.

Having briefly attended the Suzdal Art School, he later went on to graduate from the Visual Arts Department of the Vladimir State University of Humanities.

Member of the Moscow Branch of the Creative Union of Artists of Russia since 1991.

Since 1989 the artist has been actively exhibiting in Russia and abroad, taking part in various museum projects and biennales of contemporary art.

Nominee of the Golden Brush competition in 1992.

Runner-up in the Sticky Art international competition as part of the Art-Moscow fair in 2010.

Nominated for the Sergey Kuryokhin Award in 2017. 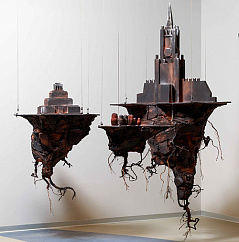