The name "Mushroom songs of Russian North" promises authentic Russian folk songs about villages, forests and nature. However, the new project of Evgeny and Anastasia Masloboevs doesn’t fit into any stylistic frames.

Unusual melodies and instruments: Norwegian and Celtic flutes and cymbals, rasping drum plates and sharp sounds of a saxophone. Music seems to be woven into a capricious pattern of different components. You won't hear a pure traditional Russian song during the concert, but the spirit of folk ethnic base is felt very clearly.

The project started with an article from the music encyclopedia. The band's leader — multi-instrumentalist from Irkutsk Evgeny Masloboev — was intrigued by the "amanita songs" of Russian Far North. He began to search for the folklore material and as a result came up with a series of "amanita plays" which he plans to record on Leo Records in London.

Anastasia Masloboeva, Evgeny's daughter, can be called the "soul of the band". With her vocals and playing the Celtic cymbals she creates both transparent and expressionistic audiomateria. The band features different musical styles such as ethnic jazz, minimalism, pointillism and noise. They constantly experiment and immerse the audience into a magic world of sounds of nature, musical instruments, and growing mushrooms... 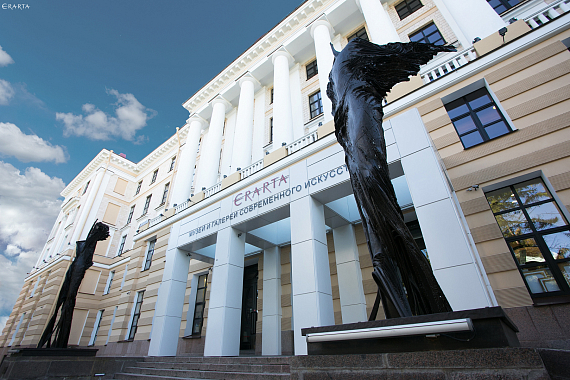 Erarta Museum Temporarily Closed to the Public
Other news
All news