The festival was held in St. Petersburg for the second time and became more stately and representative. The organizers have chosen the best and brightest short movies about art and artists from all over the world. 16 competitors were chosen out of almost 300 applications from Russia, Europe and Latin America.

Initially, the topic seemed firmly stated. But in the process of receiving and selecting films the organizers realized that a lot of the plots were limited within the romanticist story of confrontation between a colorful artist and the black and white world. Such works were declined as trivial. But films that are made in the “new painting” manner, when a shot turns into a canvas, and a film turns into moving pictures, successfully passed through the strict selection. Therefore, this time it was decided not to separate documentary and feature films.

Another innovation of this festival was two juries: the art jury and the cinema jury. They worked independently, and their opinions coincided only once. The film “Dad's stick” (John Smith / UK / 2012) was awarded by both juries.

By the way, the awarding of the winners was also more than unusual. For example, to announce John Smith’s winning the organizers just played a song from his film. The juries prepared personal words for each of their favorite. So, the film “Virtuoso Virtual” (Thomas Stellmach, Maja Oschmann / Germany / 2013) was mentioned “for organizing the chaos”. “In Ictu Oculi” was awarded for “original idea of using wild animals in the film” (Greta Alfaro / Spain / 2009).

The Grand Prix of the Art Jury was given to “A Story for the Modlins” (Sergio Oksman / Spain /2012) and the Cinema Jury’s Grand Prix went to “Journey to Cape Verde” (José Miguel Ribeiro / Portugal / 2010).

Besides the bright Competition Programme, the Special Programme of “Erarta MOTION PICTURES” was quite interesting. It featured three retrospectives. Two of them were by the jury members: a famous Russian animator Konstantin Bronzit and a British director Simon Ellis.

One of the greatest moments of Erarta MOTION PICTURES was the praising words by a German director Thomas Stellmach, the awardee of “Oscar” and Erarta Special Diploma holder. At the closing ceremony he said that he was very happy to visit St. Petersburg and Erarta Museum and that he was especially honored to receive the prize of the Film Festival that considers cinema a part of contemporary art. 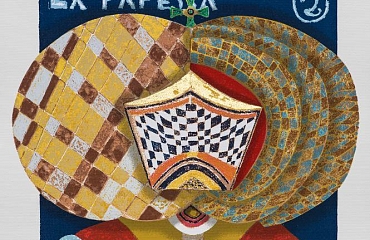