what colours can tell you

Many of us do not realize what artists are well aware of: that each colour has its own unique character and charm and interacts in a special way with other colours. Psychologists believe it is these unique features and not our aesthetic needs that determine our individual colour preferences. Naming your favourite colour can provide many clues about your personality.

Is your favourite colour primary or secondary, or is it one of their further derivatives? Is it warm or cool? Can you at all times come up with just one preferred colour, or are there several of them? And if there are more than one, does your personal ‘palette’ consist of adjacent (analogous) or complementary (opposite) colours? What is the favourite colour of those around you? Just try and ask yourself these questions at least once, and you’ll be amazed by how much you will learn. Granted, this is not exact science (or at least not yet), but definitely not void of sense: the subjective and psychological aspects of colour perception are studied by chromatology and psychology respectively, and both these areas of knowledge have accumulated sufficient statistics.

Here, for instance, are just a few interesting facts:

Psychologists think that blue is perceived as the noblest of colours, and it is associated at a subconscious level with something exalted. It is the colour of self-confident, decisive and single-minded people, capable of acts of self-sacrifice. Those who like blue have, as a rule, well-developed intuition, are patient, know how to find compromises and seek after truth, but can, at the same time, be emotionally cold and subject to depression. Those who are drawn to blue have a need for peace and aspire to stability in life. Blue is unpopular with those for whom the material side of life takes precedence over the spiritual, those who are frivolous and people who lack self-confidence. This colour symbolises fidelity, purity and constancy.

People associate the colour yellow first and foremost with two things: the sun and gold. It is the colour of the maternal principle, vital force, happiness, wisdom and harmony. According to psychology, those who like yellow value status, aspire to privileged positions and fortune and are prepared to throw down a challenge to society to achieve them. Yellow is the colour of a leader. It activates mental activity, improves the memory, facilitates the assimilation of a large volume of new information and accelerates the processes of learning and decision-making. Those who like the colour yellow look to the future, are prepared for change and open to the outside world. A taste for yellow can be observed in periods of life when the need for freedom and the attainment of harmony with the world are heightened. People who reject yellow are disenchanted, feel isolated and are unable to see any prospects or positive future.

People regard green as the colour of life, growth, security and stability. Those who like green are active and friendly, ready to co-operate and not inclined to conflict, although they not infrequently suffer from being unable to stand up for their point of view. They go through life in a precise, rational way and are serious about any task; they are prepared to render assistance to others, for which they enjoy the liking and trust of those around them. The problem is that people in the world of green are not inclined to carry out active deeds, it is enough for them to feed off the colour’s energy. This is the source of the association of green with youth, inexperience, immaturity and even stagnation. Psychologists are aware that immersion in the colour green moderates negative emotions, relieves headache, brings a sense of peace, trust and hope for the future. In a moment of spiritual tension or desolation picture green to yourself, and serenity and equilibrium will return to you.

On a psychological level, red is perceived as the colour of passion, heat and strength. It is linked with physical activity, sensuality and aggression. It is the colour of fire, action and the thirst for life. To the same degree that fire may warm, but may also scorch, opposite meanings are found in red: on the one hand — beauty and love, on the other — hatred and war. In complete accordance with the nature of fire — a blazing, uncontrollable element — a lover of red’s shift from one state to another can take place in a moment: of them it is said: ‘From love to hate is a single step.’ Psychologists think that people attracted to red like power and do not consider impatience, obstinacy or cruelty to be vices. It is characteristic of them to be drawn to adventure; such people are always in motion and cannot endure boredom and monotony. They actively seek justice, but are satisfied with its semblance and consider an authoritarian style the only viable one. They are maximalists and good reformers in situations demanding radical and even painful measures.

Psychologists believe that, on a subconscious level, violet is perceived as a symbol of all that is mysterious and otherworldly. Violet clothing indicates the uniqueness of the person wearing it and reflects their need for subtle and refined sensations. Being a mixture of red and blue, violet allows for a unity of differently directed energies, and the fact that it closes the colour spectrum permits it to be considered the crowning glory of the entire range of colours. It is known that the colour violet is capable of putting people into a deep trance. One of the main meanings of this colour is transformation; immersion in this colour can accelerate an organism’s regeneration and restoration. Under the influence of the colour violet people are inclined to become absorbed in themselves and are visited more often by inspiration, but at the same time violet implies immaturity, suggestibility and a need for support. Violet is disliked by earthbound and rational people, while scientists, poets and artists are attracted to it.

On a psychological level, orange is perceived by the majority of people as a symbol of energy and health. It is the colour of optimism, endurance and a capacity for work. It serves as an antidepressant, lifting a person’s mood at once. Having an abundance of the colour orange around them inspires people to an active lifestyle, rids them of unnecessary timidity and bolsters self-confidence. It is beneficial to all who want to motivate themselves in some way and increase their zest for life. Those who like orange are unshakable optimists, capable of successfully doing many things at once. As a rule, they enjoy eating. Many of them are inclined to be egocentric and spoilt and rarely think of exalted matters. Disinclined to have a liking for orange are phlegmatic people and those who are simply calm, as well as those who dislike being in the public eye or drawing attention to themselves. Orange is the favourite colour of children. 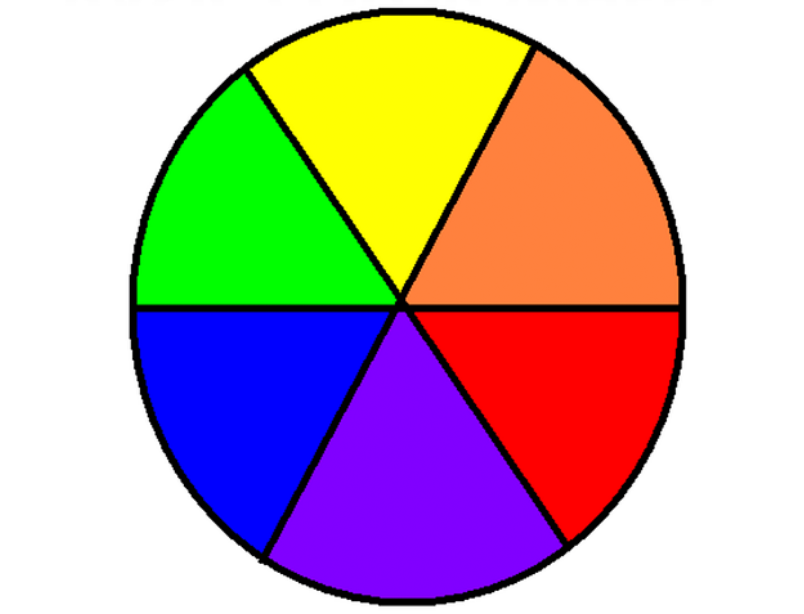 Initially created to illustrate the relations between different paints and pigments when mixed, the colour wheel became the departure point for probing into the nature of colour and its perception by human eye. The most well-known work on the subject is the Theory of Colours published in 1810 by Johann Wolfgang von Goethe who, apart from being a great writer and authoring the celebrated Faust, studied the morphology of plants and animals, mineralogy, meteorology, acoustics, as well as physiology and psychology of vision. Of his multifarious achievements he spoke thus: ‘As to what I have done as a poet, I take no pride in it. Excellent poets have lived at the same time with me, poets more excellent lived before me, and others will come after me. But that in my century I am the only person who knows the truth in the difficult science of colours – of that, I say, I am not a little proud, and here I have a consciousness of a superiority to many.’

According to Goethe’s mystical theory of colours, all colours emanate from the struggle between light and darkness (which we know to be quite justified, as there are no colours per se, each of them resulting from the refraction of light), and the first to emerge were red, yellow, and blue. These colours are still known as primary colours as Goethe called them. The mixing of two primary colours, he states, results in a secondary colour positioned between them, thus making all secondary colours derivatives from the primary ones. The pairs of colours found opposite each other in the colour wheel were termed by Goethe as ‘opponent’ or ‘complementary’ (green vs. red, yellow vs. purple, and blue vs. orange).

Even before that, in 1676, Sir Isaak Newton discovered that white was the combination of all colours: refracting sunlight with a triangular glass prism, he resolved it into the full spectrum of colours from red to violet, and after that, projecting them through a converging lens, recomposed the spectrum back into white light. Interestingly, removing a certain colour from the spectrum and passing the remaining ones through a converging lens will result in a colour complementary to the one removed (e.g., red if we isolate green).