The names of the paintings "Dance" and "Music", borrowed by Alexey Semichov and Andrei Kuzmin from Henri Matisse, as well as the certain caricature spirit of these works, can produce an erroneous impression of author's frivolous mockery. Meanwhile, they expressively illustrate the topic of collective consciousness, once so popular among such outstanding philosophers as Gustave Le Bon and Sigmund Freud.

In "Group Psychology and the Analysis of the Ego" Freud wrote that despite all prohibitions and restrictions imposed on a person by the society, he regularly breaks these bans, especially during the holidays that were originally nothing but short-term repeals of all prohibitions, this is why they have such a cheerful nature. This feature is characteristic for both primitive celebrations of ancient Romans and the modern carnivals.

In 1895, in the book "The Crowd: A Study of the Popular Mind" Lebon gave a brilliant description of the crowd psychology, which is still relevant:

— The crowd frees the individual from consciousness of his nonentity and powerlessness. In a large group of other people he feels invincible power, enhanced by the anonymity, that dispenses him from any responsibility for committed acts. Thus the crowd can experience such feelings and complete such actions that are impossible for an induvidual. 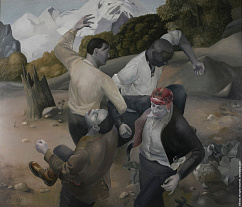 “Semichev–Kuzmin”. The project was founded in 1993. The artists arranged four solo exhibitions and participated in several projects New Academy of Fine Arts by invitation of T. Novikov.

Works are presented in the following collections

Inthe early 90's together with A.Semichovcreated a “Semichev–Kuzmin”project, where they emphasized  the brutalityandtechnocraticaspects of thedevelopment of civilization.Participatedin several projectsof The New Academyof Fine Arts by T.Novikov andworked inmedia art. Also knownas a poet and a writer.

In 2009the publishing house “KrasnyMatros” published a book of his poems“Storiesfrom the underground” which immediatelyattracted attention ofliteraturelovers and public in general.

In 2011and 2012 AndreyKuzminwas included in thelist of nominees forthe Grigoryevpoetic award.

Works are presentedin the following collections