Alexander Zagoskin was born in the town of Vozhgaly, not far from Vyatka, in 1954. A graduate in painting from the Kirovsk Art School, 19-year-old Zagoskin moved to Petersburg and continued his studies at the Institute of Cinematography where he was trained as a film artist. After graduation, Zagoskin started to work for the Lennauchfilm film studio as a stage artist and studio animator. He participated in more than twenty feature and animated films and made two independent animated movies. One of the best works of Zagoskin in cinematography is Poor Poor Pavel, the film that brought him a nomination as the best stage artist and the Golden Eagle award.

A stage artist should know how to render the feelings and emotions of the characters through colours and shapes. It was in ancient times that people noticed how diverse colours can produce different effects and correspond to a variety of feelings and emotions: the simplest examples are red as the colour of love, white as that of purity, and black as death. Colour was certainly important for all the religious traditions. Today reminiscences of that symbolism are seen in heraldry. Zagoskin knows about the magnificent power of colour and develops his deep blue — from the solemn and majestic tone to the sad and sorrowful colour of lazurite which is seen in Druids.The Garden of Love. The artist explores yellow — from the gold to the tone of lemon in Druids. The Big Lovers. He applies colour in layers of thin glazing. This method creates the impression of deep luminescence.

The decorative style that strengthens the effects of his cinematography is also present in his paintings. Adam and Eve is depicted in a classical manner as a full-size diptych. It shines with flashes of gold; the blue colour breaks through the complicated rich background. Zagoskin speaks of love through the gold; he expresses suffering through a combination of violet and orange. After Pavel Filonov he includes equally abstract and figurative elements into a picture. He brings colour to every last stroke of a painting, so that colour covers the canvas and fills it with the melodies you hear every time you look at it. 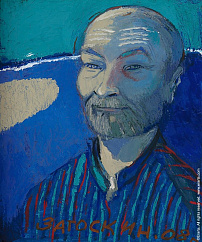