Evgeny Ukhnalev was born in Leningrad in September of 1931. He survived with his family during the first winter of the city blockade before being evacuated to the Urals. The Ukhnalevs returned to Leningrad shortly after the end of the blockade and Evgeny enrolled at the art school at the Academy of Arts. However, Evgeny left the art school to go to a shipbuilding technical school at his father’s request. At the age of seventeen, the artist was arrested with accusations of attempting to tunnel into Lenin’s mausoleum and he was incriminated in an attempt on Stalin’s life. Ukhnalev was condemned to death, but this sentence was later commuted to twenty-five years of hard labour in a prison camp. He spent one year in the Kresty prison in Leningrad, and thereafter was imprisoned in the Vorkuta camp. He was impelled to work as a copyist and later as an architect at one of the secret research and development laboratories known colloquially as sharashka. The artist always looked for a chance to draw scenes of the prison camp with its coal mines and barracks. He drew on tiny pieces of paper with pen and inkwell. He also drew portraits of his friends which he gave them as keepsakes. In 1954, after Stalin’s death, Evgeny Ukhnalev was released from prison and all charges against him were dropped after five years.

Evgeny Ukhnalev returned to Leningrad and worked as a technician and later as an architect at various design institutes. He didn’t need professional training because of the experience he had gained at the sharashka.

Ukhnalev worked as a head architect of the Hermitage for eight years starting in 1967. He restored facades and interiors and organized exhibitions. Apart from his Hermitage work, he also worked in his home illustrating books and publications. He has actively practiced painting and graphics since starting his work from home.

Even the early drawings of the prison period show the typical features of his technique and composition which now can be seen in his paintings and graphics. In his earliest works from the 70s, he worked on subjects where the present, past and future become interconnected. For instance, the classical architecture of Petersburg is overgrown with roots of unknown plants and covered with snow, and houses are deep in thought and lost in darkness.

In the 80s, Evgeny Ukhnalev took part in many exhibitions of unofficial art in Leningrad.

The artist doesn’t sketch from nature. Sometimes he uses photographs to create his pictures. It seems that the specificity within his works is caused by his outstanding memory that is able to remember each minute detail. Evgeny Ukhnalev remembers the first day of the War and the paper snowflakes hung on barrack walls which were left during that year because the northern summer was too short.

Ukhnalev designed the monument to the victims of Stalin’s terror in Saint-Petersburg. In 1977, Ukhnalev was bestowed the honorary title as a Distinguished Artist of Russia. 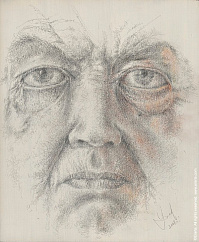 biography
Yevgeny Ukhnalev was born in 1931 in Leningrad. He studied at the secondary Art School at the Repin St. Petersburg State Academy Institute of Painting, Sculpture and Architecture.
When he was 17, Yevgeny Ukhnalev was convicted of a false charge and sent to a prison camp for 25 years. After his release in 1954, he returned to Leningrad and worked as an architect for several designing institutes. From 1967 – 1975 he worked as Chief Architecture at the State Hermitage Museum.
Ukhnalev is a member of the Heraldry Council under the President of the Russian Federation.
In 1997 he was given the title of People's Artist of Russian Federation.
Yevgeny Ukhnalev died in September 2015.