Boris Zabirokhin was born in Leningrad in1947. His interest in art became apparent early in his childhood, when the artist claims he would draw until his fingers hurt. His education started at the children’s art school. First, he attended the Tavricheskaya Art School and then the Mukhina Art School, where he learned about thick-brush painting, big format, glass and ceramics. This is how Zabirokhin chose his future profession. According to the artist, children’s classes at the Mukhina Art School instilled a taste for good painting in him and introduced progressive (for that time) guidelines — Petrov-Vodkin, Cezanne, Falk, the The Jack of Diamonds art group. However, the studies at the department of industrial art at the Mukhina School which he finished in 1970 were somewhat of a disappointment for the young man: Soviet design ideas produced a utopian impression, while subjects such as higher mathematics, technical drawing or resistance of materials seemed absolutely pointless.

At that time, thanks to the student scientific society Boris Zabirokhin discovered new techniques - lithography, etching, linocut etching and the diversity of graphic methods. He became interested in doing book illustrations which later became a stable source of income. The artist started to cooperate with the publishing house Detskaya Literatura (Children’s Literature). Nevertheless, he didn’t leave painting: he began his travels to Archangelsk, Vologda, Karelia and the White Sea. The Russian North immediately captured the artist’s heart. He realized that from that moment that his art would focus on lyrical romantic landscape and search for pure shape and colour that would be able to render the state of nature.

During that period, Zabirokhin had a keen interest in the art by the group Mir Iskusstva, Edvard Munch, and Pieter Breughel. Later the artist turned to in his liking more ‘colourful’ painting. The style he chose seemed strange for the Soviet cultural landscape of those years: it was too traditional for Gazanev’s exhibitions on the one hand, and too ‘left wing’ for official artistic circles on the other. In 1979, nine years after graduation from the Mukhina Art School, Zabirokhin joined the Union of Artists. His first personal exhibition took place in the Tea House of the Summer Garden in 1984. Since then, Zabirokhin has participated in numerous exhibitions of printing graphics.

The first joint exhibition by the Children of Arkhip Kuindzhi took place in the year 2000 featuring works from the art group which united like-minded friends of Zabirokhin. Alla Dzhigirey and Inna Sklyarevskaya whose artwork is featured in the Collection are among them. The group promotes the style inspired by the romantic landscapes of the nineteenth century. Members of the group prefer to focus on colour, shape and mood rather than social issues. Krymov, Falk, Matisse, and Vlaminck, who lived and worked in the first part of the twentieth century, are among their forerunners and inspirers. The artists emphasize that they don’t have a single agenda, but represent the union of painters who share similar views and attitudes. Zabirokhin propagates the purity of artistic experience which is different from any other feeling a person can experience. His images are full of emotions but at the same time they have a well thought out constructive modeling of shape. Uniting these two concepts the artist calls his style ‘expressive constructivism’. He brought the essence of his landscapes to a specific formula: ‘adequate colour and plastic expression of a meditative state which arises during the process of contemplation of an object’. 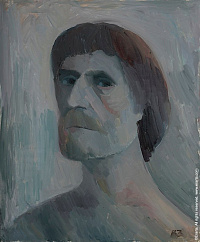