…. The Princess felt awkward, and a silence ensued. It was broken by Prince Aquamarine:

‘We’re grateful to you for having been allowed to see your mighty Empire, Kohaku,’ said the Prince, intending to switch the conversation smoothly to subjects that interested him. ‘What we’ve seen here excites one’s imagination.’

‘There is nothing to be grateful for,’ the robot responded. ‘You have not yet seen anything. You have merely gone past.’

‘And will we be able to truly see anything?’ asked Princess Azure, choosing her words carefully and trying not to make a fool of herself, as in the case of feng shui.

‘Do you know how to see?’ they heard in reply.

‘He’s answering a question with a question — that’s a bad sign!’ the Princess whispered to Prince Aquamarine, and made a diplomatic assumption: ‘Judging by your question, we don’t.’

‘Your reply shows that you are on the right track,’ said the robot, in whose voice could be heard approval. ‘For us, “to see” means to see the essence, and the essence of objects or phenomena manifests itself not outwardly, but within. Your philosophers teach that to penetrate to the essence of things, it is necessary to disengage oneself and look at them with detachment. We do the exact opposite: we try to “enter” them. We have this fable: “A little fish asked the Emperor: ‘I have heard so much about the sea, but have never seen it — how might I learn what it is like?’ — ‘The sea is around you and inside you. You are the sea,’ the Emperor answered it” (*182).’

The Blues exchanged glances and realised that they would have to try very hard to understand how the world worked here.

‘We shall be most appreciative if you will teach us to see,’ the Princess pronounced meekly.

‘I cannot teach you, but I can suggest to you where you ought to begin: knowledge of things can be acquired in a short time, but their spirit can be grasped only in centuries-long education and training,’ the robot replied, inviting its guests with a gesture to make themselves comfortable on the golden cushions. ‘Let me know when you become tired of listening to me.’

Rolling back into a corner so that the Blues could admire the view from the window without hindrance, the robot began its lesson:

‘First postulate: everything in the world — each object, phenomenon or living organism — represents a path of development. The world is not divided into living and non-living; everything in it is living, because it develops in time. Each of us is an organic part of the universe, and we are no better than a stone at the roadside, which also has its path. We are all equally valuable and essential for global harmony.

‘Second postulate: essential for an understanding of the world is the capacity to delight in nature, that is, the ability to see the beauty of the world to which we all belong. Beauty does not mean prettiness, still less perfection; beauty signifies being in harmony with the world. At the root of everyone’s character, besides a readiness for self-restraint and labour, should without fail be an aesthetic sense, which picks up this harmony. This sense will navigate you through your life and help to build your core values.

‘Third postulate: via appreciation of beauty you will find your own specific path to harmony and your place within it, and once you have understood what your path is, you must thereafter follow it, without any attempt to change it. Harmony needs no alteration — your path will itself suggest to you the logic of your self-development.

The Blues were unsure how to react to what they had heard. Goga’s crest betrayed the utter turmoil of his thoughts, while written on the genie’s face was unconcealed scepticism. Prince Ultramarine said quietly to his brother:

‘Not bad: a life lesson in two minutes! It’s almost like condensing The Forsyte Saga (*183) into one page. And it would be great if someone could do that: I never did manage to get through it at school.’

‘Now we shall turn to breathing exercises and gymnastics,’ said the robot.

‘So we don’t know how to breathe either,’ was the genie’s sarcastic aside, but the Princess pulled him up:

‘I jolly well will,’ said the genie, taking offence again. ‘Do characters have a right to their own path?’ he asked the robot acidly and, without waiting for its reaction, announced: ‘I’ll go and take a walk, then.’

‘Of course,’ the robot confirmed. ‘The majority of zones are closed to you, but you can visit the national park, Yellowstone. I will organise a guide for you right away.’

‘I don’t need a guide,’ the genie refused, ‘it’s impossible to get lost in an enclosed space; I just fancy a change of scenery, this isn’t my cup of tea. Incidentally, on the subject of cups: are we ever going to be given any refreshments? Have you got any kind of café around here, a ‘Moon and Omelette’, or whatever such an establishment might be called within your colour range?’

‘The eating zone is next to the desert,’ Kohaku told him. ‘The Yellows’ cuisine is considered the most varied in the world.’

‘Well, at last I’ve heard some good news! Come on, Goga, I can see you’re in a daze, too, after all this searching for harmony,’ said the genie, taking the parrot in his arms, and off they went. 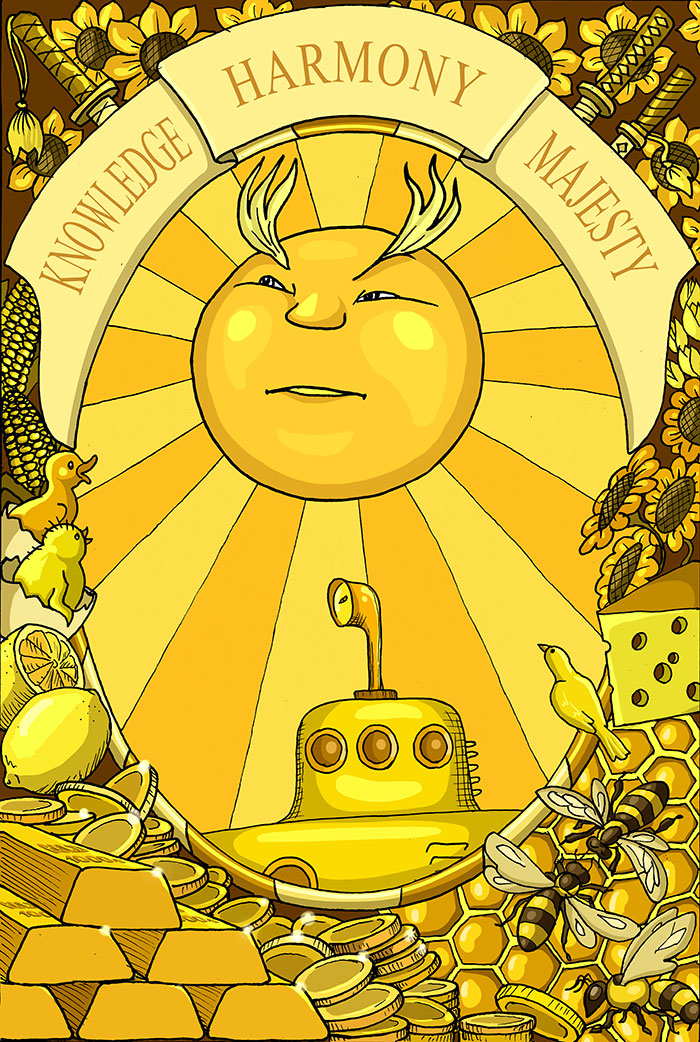 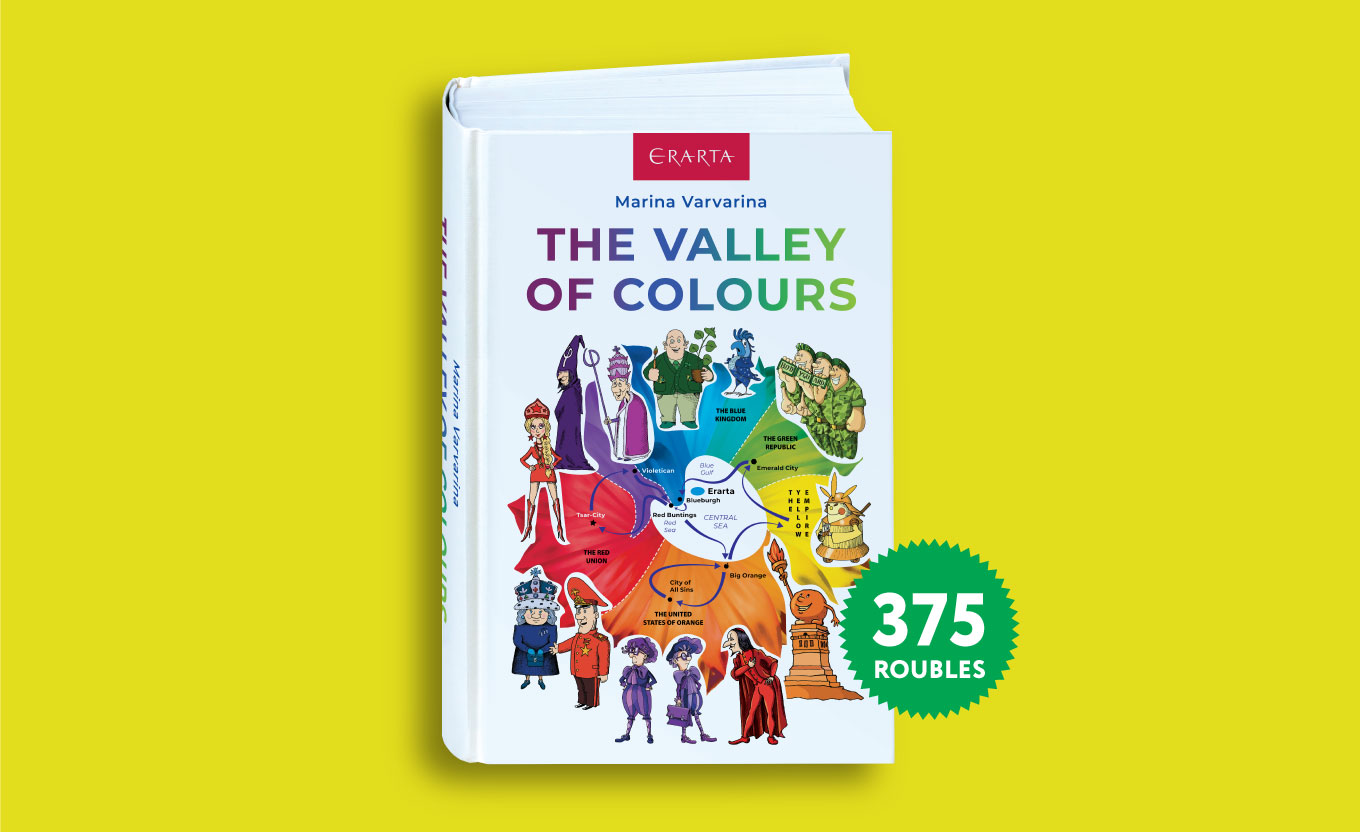