… There was a whole series of pressing questions on the Senate’s agenda that day: senators from the Pumpkin State had brought a motion to celebrate Halloween (*132) every month; the Orangery State had put to the vote the question of replacing the orange as the national symbol with the tiger lily, justifying it by the fact that the lily answered the traditions of heraldry better than the orange (*133); senators from the Peach State were demanding that, as experts on everything to do with peaches, they be granted the exclusive right to peach and impeach the President; and the Mandarin State had put forward the initiative ‘Orange overalls not only for prisoners, but for prison guards too!’ (*135).

After lengthy debate, only one out of all the proposals was adopted, the one which had come from the Terracotta State, and an entry was made in the minutes recording the decision to begin construction of a Great Brick Wall on the border with their neighbours as a means of ending illegal immigration (*136). The senators voted unanimously in favour of this proposal as it conformed perfectly to the international principle of adherence to purity of colour, and also taking into consideration the fact that such a boundary had worked well in the old days of the Yellow Empire. The remaining issues were sent for revision.

After a break, and refreshed with toxically orange Fanta, the senators moved on to debates on the question of the Orange Revolution (*137) and the use of the Terracotta Army (*138). Feeling anxious about revolutions since their visit to the Red Union, the Blues soon realised with relief that the discussion here was about not military action, but ideological revolution, intended not to overthrow foreign state regimes, but to effect revolutionary change in the minds of the Oranges’ own citizens with a view to increasing their optimism and faith in collective success. The senators called the process of increasing optimism ‘optimisation’ and attached to it the greatest significance. The Terracotta Army was given the task of developing its soldiers into warriors for the ideological front, so that they would then tirelessly carry out explanatory work with the population of the United States, embedding positive slogans, such as ‘Orange is the most eye-catching colour’ (*127), in people’s consciousness and would bring to their attention important, but little-know facts – for example, that the recording equipment in planes, known to everyone as the ‘black box’, is in actual fact orange (*127).

Upon the debate’s conclusion, the floor was given to the royal family. The Blues took the podium with a picture by a famous Impressionist, and Prince Aquamarine, in his capacity as the future monarch, made a short speech, more reminiscent of a toast:

‘We are presenting you with this masterpiece from our royal family collection because it is to its renowned creator that the splendid words ‘there is no blue without orange’ (*139) belong. Artists were the first to discover that blue, when next to orange, becomes bluer, while orange next to blue acquires a special vividness. Let us then use this knowledge and make our collaboration work to the benefit of both countries!’

Aquamarine’s final words were drowned in a thunderous ovation. One after another the senators jumped up out of their seats, and many rushed onto the platform to shake hands with the Blues. Remembering the strength of the Oranges’ handshakes, the Blues were rather anxious, but first the Blues’ anthem began to play, and then the Oranges’, and everyone stood to attention, placing their right hand over their heart. The Blues’ fingers were spared.

When the anthems had finished, the princes and the Princess were invited to the Rowan Office for tea with the President and his wife, who was known here as the No.1 Lady. President Ginger proved to be extraordinarily tall and energetic, and his wife perfectly groomed and taciturn. Having enthusiastically shaken everyone’s hand and clapped everybody on the shoulder, President Ginger invited his guests to take their seats at an oval table, already laid for tea. Without waiting for everyone else, he sat down first in the place where the biggest cup was. With a practised gesture, President Ginger threw off his jacket, loosened the knot of his bright-orange tie and set the hourglass he had extracted from a trouser pocket on the table in front of him, after which, rolling up his shirtsleeves, he tossed out his favourite maxim:

‘Errr…’ drawled Prince Aquamarine in bemusement, ‘we thought businessmen made money, not politicians.’

‘I am a businessman,’ the President replied without the least embarrassment. ‘Do you know how fabulously rich I am?’ 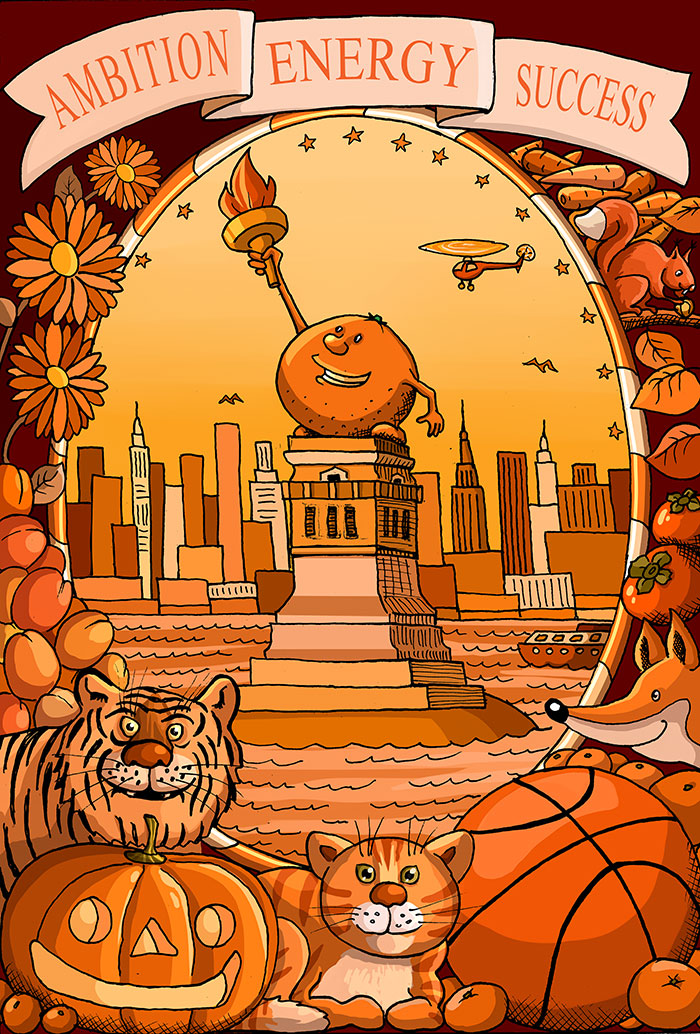