… And so they lived, in a quiet and measured way, and there was nothing to herald any changes. But, as we know, tiny innocent events may sometimes lead to major unforeseen consequences. One day, the whole royal family assembled for lunch in the Forget-me-not dining room, named thus by the genie not in honour of the sky-blue flower of the same name, but to fix in everyone’s consciousness the idea that no one should forget to eat at the appropriate time. After the traditional exchange of pleasantries about the weather, everyone turned to discussing the royal tennis tournament, which was taking place at the time. The genie started cracking little jokes about the Blues’ tradition of denoting a score of zero in a tennis match with the word ‘love’ (*31), and laughed at the idea that this semantic usage turned the renowned hit ‘All You Need Is Love’ by the beat quartet The Blue Beatles into an anthem for losers. Prince Ultramarine argued furiously with the genie, while the Queen hemmed from time to time in support now of one, now of the other.

All of a sudden, Princess Azure tossed her fork aside and exclaimed in irritation:

‘I’m sick and tired of raw crayfish! Why can’t they be boiled?’

The unexpectedness made Goga drop the nut he had been wrestling with for the last five minutes from his beak, and the genie imperceptibly moved the cheese plate closer to him in case the Princess decided on impulse to smash some crockery. Accustomed to her daughter’s emotional outbursts, Queen Indigo retained her composure:

‘Because crayfish, if you boil them, turn red,’ she replied calmly, but the Princess continued to argue:

‘Well, let them turn red, what’s wrong with that? Why can’t we eat boiled crayfish?’

‘Because our foremost duty is to preserve the purity of our blue blood,’ her mother insisted patiently. ‘We should not be adding any other colour to it. These are the basic rules, and you know them perfectly well.’

‘All right,’ the Princess said, refusing to calm down, ‘let’s not add another colour, but can we at least have a little less blue under our noses? Why do we only have blue marlins (*32) swimming in our sea, only blue frogs living in our marshes and nothing but cornflowers growing in our fields? Why is it the girls’ dolls are all mermaids with blue hair, and nothing is served for dessert except blueberry muffins and Blue cheese with mould?’

‘But Blue cheese is excellent cheese, dear, and we really enjoy it,’ the genie said timidly, at that very moment lifting a large piece of that same cheese towards his mouth on a cracker. ‘And then how are we to reduce the amount of blue around you? I’m blue, and Goga’s blue as well. Don’t you want to have us at the table?’

Not understanding the meaning of all the words being spoken, but picking up the general tone of the conversation, the alarmed parrot hopped over to the Princess and, looking her in the eye, asked:

Under normal circumstances Princess Azure would have given Goga a pat on the head, but now she was out of sorts.

‘All this just gives me the blues! I’m declaring a hunger strike, starting today!’ she snapped and, overturning her chair, ran noisily out of the dining room.

Without a reply to his question, Goga scurried back to his place and, in great agitation, set about swinging on the back of a chair, trying to work out if it was worth going back to his lunch, or whether everything was ruined and this was no time for nuts. His crest would now droop down, now straighten up, a visible sign of the storm of emotions that was tearing him apart.

‘Such terrible weather today, isn’t it? And they’re not predicting anything good for tomorrow either,’ pronounced Queen Indigo, exhaling deeply and looking around for the corgis; she could not find them, though, as they were having lunch somewhere else.

‘Damn your renowned politeness!’ exploded Prince Ultramarine. ‘Your daughter’s going on hunger strike, and you’re talking about the weather, Mother!’

‘Very well,’ Queen Indigo submitted with unexpected speed, and casting an unhappy look at the people around the table, she asked dejectedly: ‘So, what do you think about it all?’

‘I think it would be good to eat well,’ said the genie, plucking up his courage, but Prince Aquamarine gave him no chance to run with his favourite topic.

‘Well I think it’s high time we started collaborating with other colours,’ he informed his mother resolutely. ‘Food has nothing to do with it: you know I’m prepared to eat nothing but oatmeal porridge with blueberries for breakfast and fish and crayfish for lunch myself, but our country is soon going to start falling behind in its development, unless it makes use of the achievements of other nations.’

‘Could we please ask for the soup to be heated up?’ the genie asked in a cajoling tone, sensing that the conversation was dragging on.

‘But we’ve all got our borders firmly fixed! We don’t want any collaboration with other colours, do we, Mother?’ asked Prince Ultramarine, turning a deaf ear to the genie’s request.

‘History doesn’t stand still: there was a time for fixing borders, but now the time for integration is coming,’ Prince Aquamarine continued his fervent speech. ‘Admit it, Mother, the division of states wasn’t carried out in the optimal way for our economy: the Greens, for example, got our Greenwich (*33), and now we pay them for synchronising our clocks, regardless of the fact that it wasn’t them, but us who established the scale for telling the time! Not long before the appearance of the New Colours we developed the super-computer Blue Gene and the chess-playing computer Deep Blue (*5), and what have we done that’s outstanding since then? We don’t want people to call us the Old Colour in the sense that all our achievements are in the past!’

Queen Indigo seemed to be pondering on her son’s arguments, but in reality she was thinking about something else altogether: ‘I mustn’t make my daughter unhappy. What will I remember on my deathbed: that it was essential to adhere to state policy? That I was right and my daughter wasn’t? Far from it: I’ll remember that for my daughter’s sake I could have done what she wanted, but I didn’t, and that thought won’t allow me to die in peace.’ Such simple, everyday wisdom helped the Queen to make the right decision, and they had not even had time to reheat the soup for the genie before Queen Indigo gave her head a decisive shake and, sensing the historical importance of the moment, made what was almost a speech from the throne:

‘We, Queen of all the Blues, Indigo II, have decided that, in the interests of our people, we must organise a maritime expedition to neighbouring countries with the aim of establishing trade and cultural exchange. Prince Ultramarine is appointed to be responsible for the expedition, Prince Aquamarine — for the conduct of talks. We, the Queen, take upon ourselves consultation with Parliament and the Intelligence Services regarding the impending trip.’ 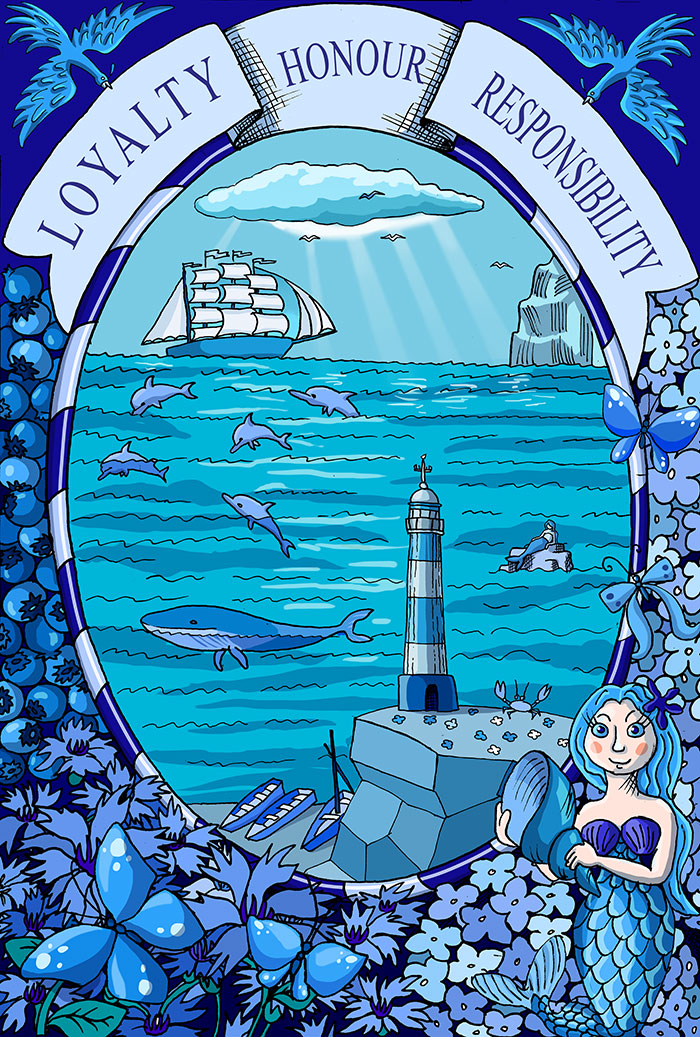 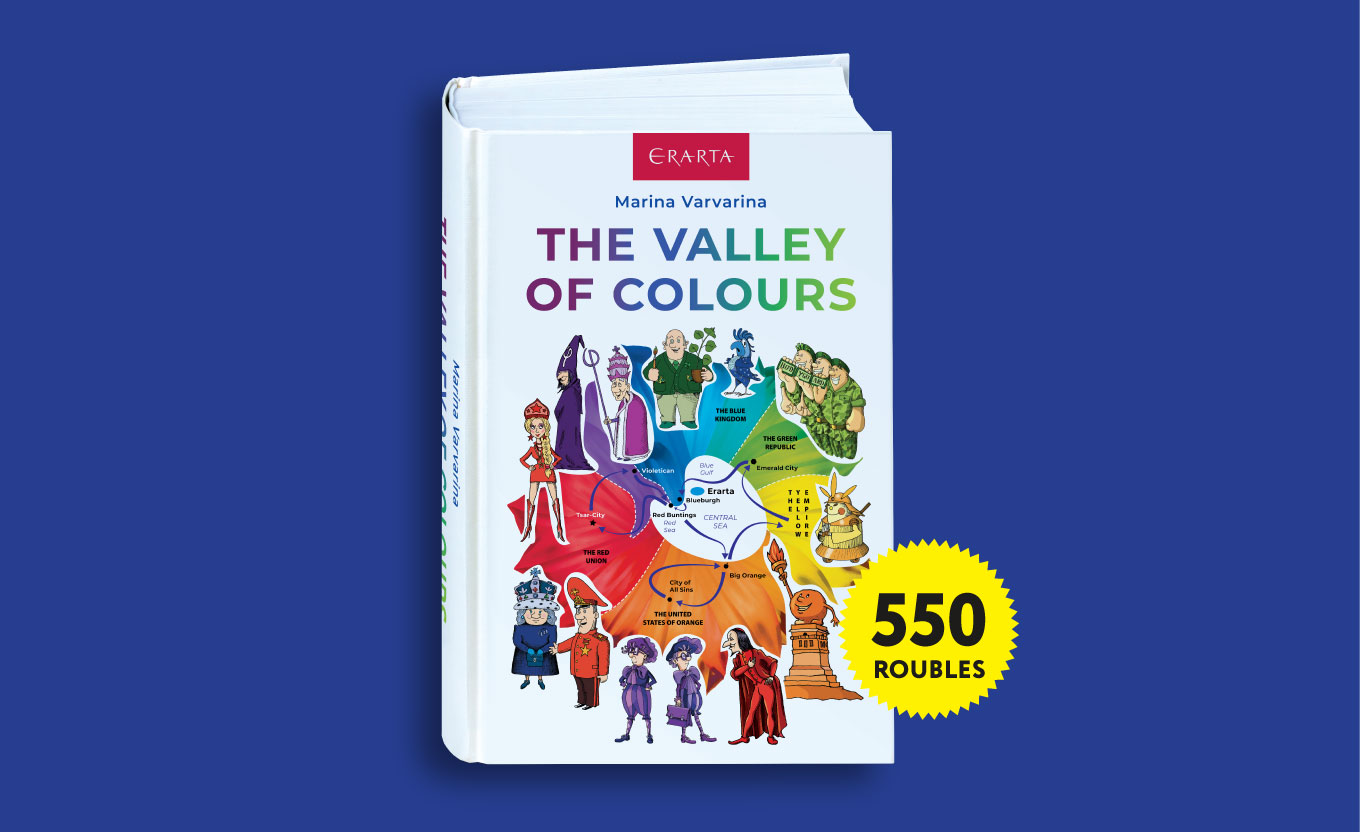