Almost every active Internet user is familiar to the artist’s works: his "Mukhobama" (was inspired by a curiosity of Barack Obama’s speech and perpetuated the politician’s face on the front of the fly swatter) and the installation of a heart made of red umbrellas were highly reposted.

Foreign media such as Wall Street Journal noticed Slonov’s works after the scandalous ban of his solo exhibition "Welcome! Sochi 2014" under the "White Nights" festival in 2013. In one of the interviews Vasily Slonov commented this fact: "You can’t interpret the art so straight forward. If an artist depicts the gallows, it doesn’t mean he wants to hang everyone: athletes, viewer, guests ... And if he paints an ax, it doesn’t mean he wants to hack everybody to death. The matter is that different people mean different things and feelings behind the same images". 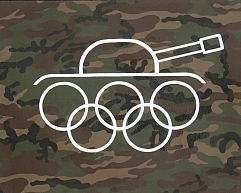