Sergey Pasukhin is a sculptor with academic education, old-world artistry and contemporary vision. As an artist, he masters several visual languages and is experienced in restoration works (cathedrals in Kronstadt and Omsk). His graduation work at the Academy of Arts was design of Joseph Brodsky’s monument.

The works of the recent years reveal Pasukhin’s new artistic thinking and techniques. Thus, his “Cultural Cross-Section” from Erarta Museum collection, created specifically for the contest “Art Object in contemporary museum” organized by Erarta Museum of Contemporary Art, is a large-scale showwindow filled with various artifacts that represent the entire history of St. Petersburg, from the foundation to the present day. A human skull and rotten piles, gold and silk, broken pince-nez, rusty tin, porcelain doll and glass bottle, Coca Cola can and a chips bag ... It all looks random, but each object is carefully placed, and together they create the forethought artistic impression. The visual imagery is accompanied by sound: the built-in stereo system plays a poetic composition by Alexander Kramer created especially for the project. This work was recognized among the finalists of the competition and made such a strong impression on our foreign partners that they immediately ordered a copy for one of New York art galleries.

Sergey Pasukhin has reached the age of “acme”. Time will tell whether he will develop into a significant artist able to faithfully express the time and the place, or will remain a great stylizer of traditional and contemporary art. Either way, it will be interesting to follow his creative path. 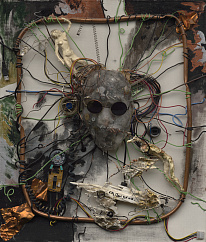 From 1987 to 1993 worked as a teaching assistant at Limonov’s workshop.

From 1994 to 2000 studied at the Ilya Repin St. Petersburg State Academic Institute of Fine Arts, Sculpture and Architecture (The Russian Academy of Arts; Department of Sculpture, workshop of M. Anikushin).

Member of the Union of Artists of Russia.

Lives and works in St. Petersburg.

Pasukhin participated in various projects built over monumental, park and interior sculpture (1999—2005); urban festivals of actual street sculpture (2004, 2007); studied modeling of architectural decorations and settings (2004—2006) , was engaged in restoration projects (2006). He created and manufactured original artistic gifts (including exclusive chocolate sculptures), and has been designing exclusive book editions (since 2000).

Over the recent years, the artist has been actively participating in synthetic abstract art projects.

His works are presented in galleries and private collections.