Konstantin Pyanov, born in Nizhny Novgorod in 1973, is the son of an army officer. A few years after his birth, his family was stationed in the northern town of Dudinka. When Pyanov finished the tenth grade at school, he and his friend moved to Khakassia. While in Khakassia, Pyanov met Vladimir Tiron, the head of an art school, where he then started working for the school as a guard and, step by step, took up drawing. During the five years the artist spent in Khakassia, he met Andrey Pozdeev (Andrey Pozdeyev) and Vladimir Kapelko (Vladimir Kapel’ko). The latter not only became his teacher but also inspired Pyanov to do artistic renderings of ancient wall-paintings, petroglyphs, and rock drawings that Pyanov saw in large number during their joint archeological expeditions around Khakassia. Kapelko left a great legacy in the form of copies of the Khakass petroglyphs. The collection is unique because the archeologist copied those petroglyphs that were subsumed before the waters of the Yenisei River basin rose.

After five years in Khakassia, Pyanov had to go to Nizhny Novgorod on his parents’ orders and enter art school.

Today the artist lives in Nizhny Novgorod, where he teaches at the art school. Every summer he goes to Khakassia for a few months, where he lives with his friends in an earthen house on the bank of the Yenisei. Pyanov makes sketches, drawings and watercolor paintings there. He uses this preliminary work later, when he gets back home and transfers all the collected materials to canvas. In his paintings and graphic works Pyanov uses authentic patterns and motifs, scenes of the hunt, images of trees and animals in the way they were drawn by man many thousands of years ago. He works in a naïve manner applying local colours, especially the palette of ‘earthy’ colours — ochre and green. Thus Pyanov brings the concise ancient motifs, together with their bright emotionality, back to modernity. 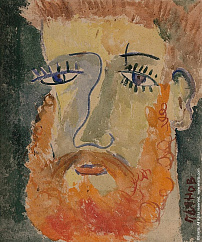